Over the years I’ve gathered a lot of fabric for sewing (and a LOT of other craft items).  That means I have lots of fabric to work with right now when stores are closed and while we’re all trying to do our part to isolate.  In my province, since the cases of Covid 19 have flattened, we are allowed to have a bubble family (one other family group).   I took my two little granddaughters out for a walk on a trail and along the way I spotted a beautiful quilt on a clothesline.  Wouldn’t you know it, my phone was back at my son’s house.  It didn’t take long to find the pattern on the web when I got back though.  This will be an Irish Chain with stars. 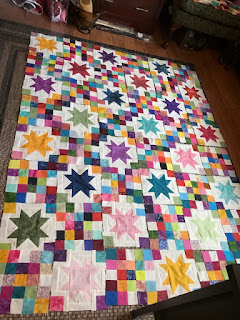 I’ll show you the cover when I’m finished.  The upside to sewing for me is listening to Youtube on my iPad.  Lately, I’ve been listening to lots of tips on marketing.  For those of who write… The number one tip is to create a mailing list.  That is something I’ve fallen down on.  I had a mailing list on MailChimp but they revamped their system and my list disappeared along with the names of the people on it.  Sad, and totally my fault.  I’m going to do a better job at it from now on.
Anyway, I’m a huge fan of Youtube.  There are so many interesting topics, some of which I hope I’ve absorbed whenever I’ve lost focus on the iPad and got wrapped up in sewing.  ; )
Speaking of learning subconsciously, it may have worked that way for me when I was studying via long distance through Guelph University. Back when I worked at the Department of Agriculture, I decided to enhance my knowledge base on the job.   I wanted to be a Qualified Plantsman.  The tests were overseen by my boss, but most of the lessons were via email. I had dozens of tapes to listen to as well as text books.  Since I worked during the day, I’d often listen to the tapes in bed in the evening.  And, I’m sure you can guess the next part…I usually fell asleep with the lessons playing in my ears.  When I passed the course with high marks, I often wondered if it was in part, due to learning while I was asleep.  ; )

Book Alert:  I’m working on a new book/series. It will be another paranormal/urban fantasy romance.  This one is taking me a little longer.  I think it’s because I’ve written the Jess Vandermire series for so long.  I know my characters so well.  They’re almost like family.
Writer’s tip:  A common tip in writing is “WRITE WHAT YOU KNOW”.   If you write Urban Fantasy/paranormal you don’t have to worry about that.  (add the canned laughter).  That said, I’m sure if you’re like me, you do your research.  When I started my vampire series, I was thrilled to be the owner of a set of encyclopedias dated 1890.  The vampire beliefs in old encyclopedias was very different from modern ones and helped me greatly in creating my modern take on that world with a vampire cop with a brother who is a priest.

What I’m Enjoying on T.V.

Things are looking up for you.  A squad of vampire hunters will take out the hoard living own your street and you'll be able to go out at night again—as long as you avoid the full moon!  Things might get hairy around that time.

Graves of Retribution -- Book 3 in the Jess Vandermire Paris trilogy.  (Book 7 in the series) 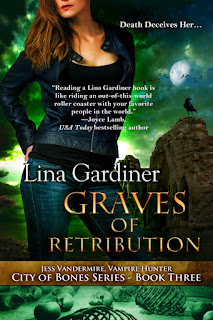